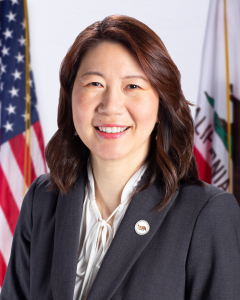 In March 2022, Amy Tong was appointed Secretary of Government Operations by Governor Gavin Newsom. Secretary Tong was elevated to the role having previously served as the State’s Chief Information Officer (State CIO) and California Department of Technology (CDT) Director, and the Director of the California Office of Digital Innovation.

Secretary Tong is a first-generation immigrant who came to America with her family in 1986 when she was a teenager. They brought only eight suitcases with them and relied on public services to get acclimated to their new home. Those services, which allowed Secretary Tong and her family to build a life in California, were monumental in her decision to become a public servant. Secretary Tong is the first immigrant to have served as the state’s Chief Information Officer and Department of Technology Director.

Secretary Tong began her wide-ranging career in state government as a programmer for the State Water Resources Control Board. She rose to positions of increasing leadership and responsibility over 25 years working in six state organizations.

Prior to becoming Secretary, she played a vital role in the state’s response to the COVID-19 pandemic as the state’s Chief Information Officer and Department of Technology Director.

Working seven days a week for more than a year, Tong led critical round-the-clock technology projects and repairs to provide information and data needed to inform the pandemic response. Tong helped create systems for monitoring hospital capacity during the pandemic; improved public health technology tools to track and report disease; provided technology to support remote learning for California students; supported the technology needs of tens of thousands of state employees transitioning overnight to telework; built tools to optimize the distribution and administration of vaccinations; made recommendations to speed the processing of unemployment claims and shored up technology critical to fighting the state’s worst wildfire season on record. Before it was over, Tong and teams from the state’s technology, public health, emergency services and employment development departments had conducted more than 75 emergency procurements, built more than 40 new technology tools, and made critical repairs to legacy systems — work that typically would have taken the state more than a decade.

A champion of user-centered design, Secretary Tong has led efforts to modernize the State’s project delivery, technology procurement, cloud smart adoption, open data, workforce development pipeline and cybersecurity measures. Over her career, she has been a champion of data–driven decision making and has constantly looked to utilize new, cost-effective technologies for the benefit of California residents.

Prior to becoming Secretary and leading the California Department of Technology, Secretary Tong was Chief Information Officer for the California Health and Human Services (CHHS) Agency and Chief Deputy Director of its Office of Systems Integration. In that role, she oversaw a modular procurement approach and agile methodology to modernize the Child Welfare Digital Services (CWDS) project and positioned the agency to be at the forefront of open data, which kick-started the current Statewide Open Data platform.

From 2012 to 2014, Secretary Tong was Chief Information Officer of the California Lottery, where she revamped the Lottery website to enhance user experience via customer-centric design, helped improve customer engagement and awareness of the Lottery’s mission through digital services, and took steps to ensure the security and integrity of lottery systems.

Secretary Tong’s earlier state experience includes serving as the first chief technology officer at the Board of Equalization (now part of the California Department of Tax and Fee Administration), where she used data analytics to help prepare for the modernization of this legacy system transformation. From 2008 to 2011, she served at the California Public Employees’ Retirement System, where she demonstrated how the use of technology could serve as a business enabler rather than merely backend support. Later as Data Center Chief at CalPERS, she was on the front line of the massive CalPERS Pension System Resumption (PSR) project that transformed 49 legacy and 60 support systems into a single solution platform for managing members’ retirement and health benefits.

In her first state role at the Water Resources Control Board from 1996 to 2008, Tong began as an entry level programmer and rose to become acting CIO. There, she focused on data management and GIS visualization to help drive policy. One of her accomplishments was being a key part of the team that worked with Lawrence Livermore Laboratories resulting in the major policy change of removing Methyl Tertiary Butyl Esther (MTBE) from reformulated gasoline.

In addition to her leadership roles in state government, Tong volunteers as a member of the California Northstate University Board of Trustees, the National Association for the Advancement of Colored People, the Asian Pacific State Employee Association and as National Senior Advisor for Asian Pacific Islander American Public Affairs Association. She also served two years as the Planning Commissioner for City of Elk Grove.

Secretary Tong holds a Bachelor of Science in Management Information Systems and a Master of Business Administration from California State University, Sacramento.